Are Chatbots your Next Best Acquisition and Retention Channel?

90 percent of our time on mobile phones is spent on email and messaging platforms.Leading messenger service Facebook Messenger has 1.2 billion monthly users as of April 2017.In the same month, Chinese social app giant Weixin, which is internationally known as WeChat, reached close to 1 billion monthly users.


Meanwhile, the challenge – in all areas and specifically in e-commerce – remains to foster a loyal relationship with customers and cost-effectively engage in individual conversations around their needs and desires. Feeding those desires will not only convert customers but also help your business retaining them long-term.

Are chatbots the answer?

Since 1950, when Alan Turing outlined the Turing Test – the criteria for identifying artificial intelligence (AI) – scientists and now also developers have been on a quest to mimic human intelligence with machines.

It did not take long to see the world's very first chatbot. ELIZA was developed in 1966 at the MIT Artificial Intelligence Laboratory by Joseph Weizenbaum. It was meant to emulate a Rogerian psychotherapist and consisted of only 200 lines of code. Test users could interact with ELIZA in written form and describe their symptoms to the bot.

What exactly is a chatbot then?

The technology that feeds a chatbot 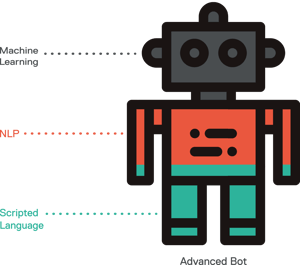 The bots’ abilities go hand in hand with its use case. Not all bots need to be based on buzzword technologies such as Machine Learning and Natural Language Processing (NLP). Simple requirements demand simple solutions. If your use case entails providing fixed information in response to fixed answers, there is simply no need for any complex logic behind the bot. Read about all the elements of the technology behind a chatbot in the full White Paper.

Introducing your next best Sales and CRM Manager

Whether to support during the sales process, to retain your customer afterwards or to simply engage a user. There are plenty of tasks a chatbot can take over.

Having a bot assist customers during the sales process is one of the most common e-commerce use cases for chatbots.

Accenture have seen 80 percent of customer queries solved through bot actions that would have otherwise been solved through human operators. In customer support, this makes it a big cost saver if configured correctly: a bot that is available for 24/7 support and that can play a vital role in managing the relationship with the customer.

Interested in finding out even more use cases for chatbots? Head right to our downloadable White Paper with more information.

Since chat programs became popular with the rise of instant messaging services like ICQ in the 90s, private and professional communication has expanded vastly to messenger platforms. The era of bots takes advantage of deeply ingrained behaviors evolving around constant connectivity and seamless integration into a user’s devices.

Facebook Messenger has turned into the globally leading chatbot platform within the past few years and hosts nearly 100,000 chatbots.

WhatsApp is the number one messaging app for countless countries around the world, ranging from Latin America to Europe and is just getting started, so watch this space!

Weixin, which is internationally known as WeChat, is the the Chinese export and omnichannel expert when it comes to seamlessly integrated user journeys including especially simple chatbots.

Before Facebook became the market leader, Kik led the chatbot era on an international scale. In 2016, its 300+ million users had access to more than 20,000 chatbots.

How much is the chatbot market worth?

In 2016, the chatbot market was valued at $703 million. By 2020, over 80 percent of businesses are expected to have some sort of chatbot automation implemented, which will take the market value to $3 billion.

Keen to find out more?
Download the full White Paper and learn more about:

Are Chatbots your Next Best Acquisition and Retention Channel?

How to Build a Bot in 5 Simple Steps